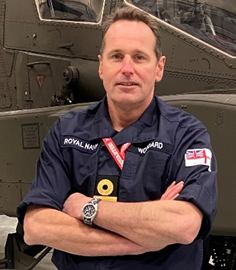 Jol joined the Royal Navy in 1991 and streamed ‘Junglie’ Commando Sea King helicopter pilot. His early career was dominated by joint and multinational operational service afloat and ashore. Over a period of c.20 years on front-line helicopter units, he deployed to the Balkans, Northern Ireland, Iraq, Lebanon, Afghanistan and Libya. This phase culminated with command of 845 Naval Air Squadron, coincident with the 2011 Libyan campaign and sustained operations in Afghanistan.

Outside of aviation roles and in the decade since, he has served in staff and command roles spanning outer office, policy and strategy, capability and acquisition and training. He has served in Army and Navy Command HQs, the Ministry of Defence and the Department of International Trade. He commanded Britannia Royal Naval College 2016-2019, with responsibility for initial Officer training, University Royal Naval units across 64 universities and the RN’s Leadership Academy.

Jol assumed his current role in Oct 21. As Head Combat Aviation Programmes, he is the Senior Responsible Owner for New Medium Helicopter and Chinook Capability Sustainment Programme (CSP) (FMS contracted CH47 Extended Range) and has oversight of Apache CSP and Pj MATCHA (H135) and for the capability coherence of Combat Aviation development.

Jol is a graduate of the UK’s Advanced Command and Staff College and member of the Royal College of Defence Studies (2020). He is a BSc Hons (Exeter) and MSc (Leadership, Cranfield), and holds a PGCert (Strat Studies, KCL) and Certificate of Company Directorship (IoD).