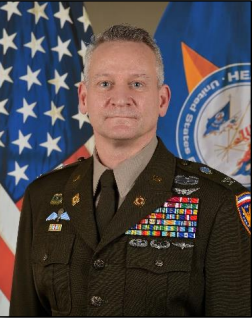 A native of Plano, Texas he entered the Army Reserve as an enlisted Soldier in 1988. While serving in the simultaneous membership program, Army National Guard, he attended Texas Tech University where he was commissioned in the

Quartermaster Corps through ROTC in 1994.

COL Morris is a graduate of the Quartermaster Officer Basic Course and the Logistics Executive Development Course Fort Lee, Virginia where he earned a Master’s degree in Logistics Management from the Florida Institute of Technology. He also attended the Command and General Staff College, School of Advanced Military Studies, and the Advanced Strategic Leadership Studies Program at Fort Leavenworth,

COL Morris and his wife Tina have one daughter Molly who lives with her husband Robert and daughter Ava in Texas.